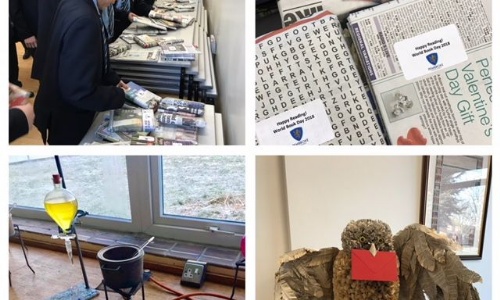 Ruined by the weather
sorry for the delay,
better late than never
Happy World Book Day!

Friday 8th March was our Harry Potter themed World Book Day. We chose Harry Potter as its 20 years since the first book was published and we felt that needed commemorating. Miss Neal led an inspirational assembly on JK Rowling who encompasses our school values perfectly.

#Curiosity – Throughout her. early life she travelled and had an array of interesting jobs before becoming an author. Rowling took hold of every opportunity and wasn’t afraid of the unknown

#Courage – She picked herself up from rock bottom and wrote in every moment she could grasp whenever her daughter was asleep. Despite being very poor, tired (as a new mum on her own) and grieving her mum and her marriage and having poor mental health – she was determined to use the ability she had to change things.

#Passion – She was a bookworm from an early age and had a passion for language (as seen in her studies through education). She studied the classics and French at University and used her gift of ‘words’ to change her life. She is a life long learner!

#Wisdom – Her experiences have made her wise in life. She is sensible in business as she has gone from ‘rags to riches’ whilst having a well grounded upbringing with parents who valued education and reading. She got her degree, trained as a teacher, learned languages, got her work published and is now producing her books as film and drama on TV

#Generosity – She became a billionaire from having nothing except a room, her daughter and pen and paper. She has since lost her status of billionaire as she has given so much of her money to charities because she can empathise with those less fortunate that herself.

At the end of the assembly each student left the hall with a book which had been donated by a member of staff and wrapped up as a 'lucky dip' parcel. Students were reminded that some children in this world don't have access to an education, don't have a book and in some cases don't ever receive a gift. Students were delighted to receive a free book and are enjoying an eclectic range of wizarding activities in lessons today. Science are concocting potions, Art students have made a large 'Hedwig' model over the week, English are using Harry Potter to inspire creative writing and to practise the GCSE Language paper. French are learning a whole range of new words and later in PE there will be a quidditich match.

Check twitter and facebook later for more photo's and a full write up will be in our next newsletter at the end of the month!