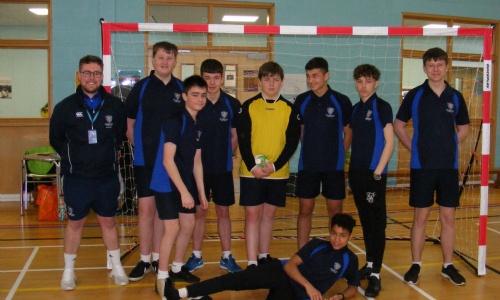 On Monday 18th March, the u15 boys Handball team played in the County Cup they qualified in back in October. Involved were some of Lincolnshire schools big players – King’s Grammar, Carres Grammar, Bourne Grammar, Skeg Grammar, Louth, QEHS, Branston. Starting on the back foot after a loss to Branston (who went on to win the Cup), our boys put in a solid team performance to win convincingly by scoring 5 goals against Louth. Going into the last game of the group stage, it was a game against Skegness Grammar that would be the decider. A passionate performance saw us come back from a goal down to win the game. Pembroke had made it into the semi-finals of their first ever County Cup Final! Unbelievable Jeff!!! Absolutely buzzing! Pumped for the semi, we could get a medal here boys! The fixture had Pembroke vs King’s, which from the whistle was a physical and aggressive match up. Our boys were organised and battled for every ball, scoring 2 early goals, but a couple of mistakes in defence saw us go 4-2 behind. This wasn’t it though, we ain’t havin that - us handballers #achieve together! The boys revved each other up and you could see how desperate they were for a place in that cup final, organised in defence, backing each other up by putting courageous, physical tackles in, determined to not let the King’s players through our all. There was a massive sense of urgency, and the passion did pay off. Two goals from Ashton Toplis and Reiss Edwards say Pembroke brought the scores level to 4-4! The whole sports hall went crazy. A euphoric moment for us. Even the teams already knocked out were involved and it became a massive stage for our boys to be in the spotlight. Unfortunately we conceded a 5th goal late on, which saw King’s go through, but we still had heads held high after the most passionate performance I’d seen from any team all day. Our boys were ready for the Bronze medal match against Carres Grammar School. The Carres lads looked a strong outfit, but we immediately matched them physically. Solid in defence, we put bodies on the line for every ball. Chance after chance came our way but agonising could not find the goal we needed, and unfortunately lost the match 1-0.

As much as I thought they deserved one, the boys didn’t come home with a medal, but I’d said it passionately to these boys the inner sense of collective achievement is greater than the tangible reward. These boys now have had a massive confidence boost. To reach a county final in the first place was an incredible achievement back at LSST in October, and to match the most competitive schools in Lincolnshire and finish 4th overall in the county is an outstanding effort. All they want now is more Handball! An effort we should all be proud of!